Applying more than 2 decades of Experience in Customized Corneal Surgery.

CIPTA® advanced planning software was born in 1996 to plan fully customized refractive and therapeutic treatments, by means of the definition of the Ideal Shape, thus optimizing the patient’s quality of vision and minimizing the surgical invasiveness.
CIPTA® is the ultimate tool for the Ophthalmic Surgeons, dedicated to plan the customized treatment by combining Precisio® morphological and refractive data with the Ideal Pupil computed by pMetrics® and the refractive error to be corrected.

CIPTA® is granting, as the natural consequence of the corneal regularization, by means of the Ideal Shape, a great vision for each patient.

CIPTA® planning incorporates a variable-width transition zone, in order to maintain a constant slope with linear variation of the corneal curvature and thus minimizes the risks of regression and of post-op halos and starbursts.

– The ablation volume is defined by the intersection of the Ideal Shape that is the regular aberration free surface designed on patient’s refractive needs, and the real corneal surface as acquired by Precisio® tomographer.
– The refractive zone is limited by the diameter equal to the sum of the projected ideal pupil, as identified by pMetrics® pupillometer, onto the ideal corneal shape added of the distance included between the centre of the treatment and the pupil centroid.
– The connecting zone between the refractive zone and the remaining untouched surface of the cornea is designed to grant a constant slope in each radial direction.

The default planning strategy is automatically presented. The Surgeon may customize each single parameter. 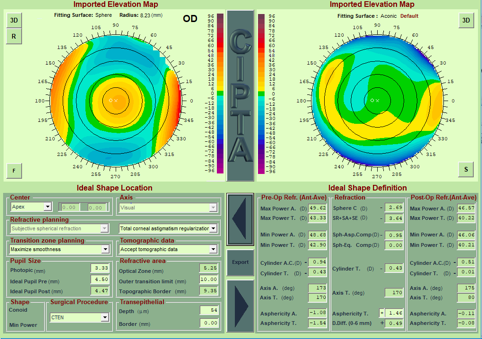 Morphological and refractive definition of the ideal post-op anterior corneal surface referred to the BFS. 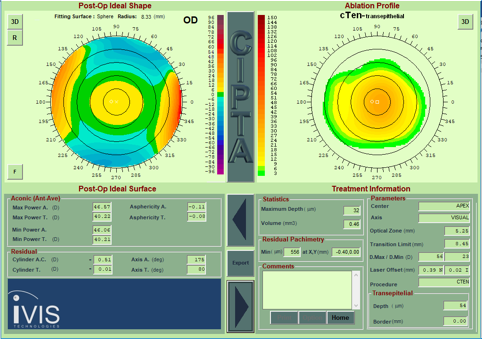 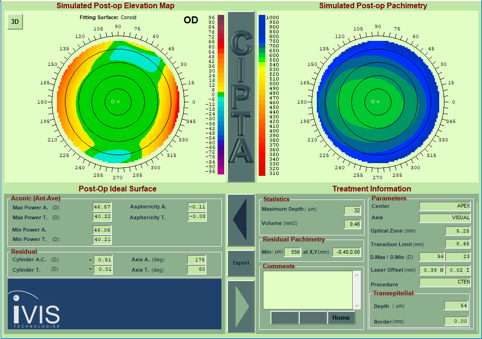 CIPTA® is a fundamental departure from refractive-only approaches marketed with Wavefront measurements. Rather than using only refractive data available through the pupil, CIPTA® incorporates a synthesis of Precisio® morphological and refractive data with the Ideal Pupil computed by pMetrics® and the refractive error.

Importantly, surgery is executed on the surface that is detected in high-resolution by Precisio®. This sharply contrasts with the widespread approach to etching a lens, thus producing an aberration map on an unknown surface. 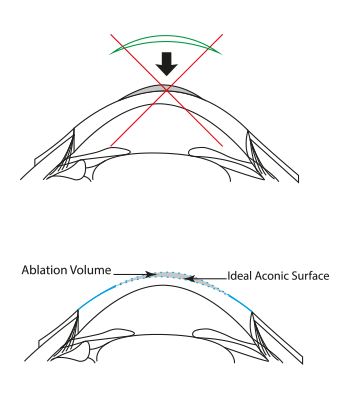 The philosophy that drives CIPTA® states that the refractive outcome is the natural consequence of the modifications of the corneal morphology.

Customised ablations based only on aberrometric data deduced by Wavefront devices and/or topographers attempt to directly compensate for the refractive error under the assumption that there is no need to know the corneal morphology.

Wavefront ablation profiles are based on a lens to be applied onto the cornea with no consideration of the corneal morphology.

CIPTA®, thanks to the principle of the intersection between the anterior corneal profile and the ideal surface, proportionally requires less tissue ablation as the irregularities of the cornea increase, as opposed to Wavefront-guided ablations which require a higher amount of tissue as irregularities increase.

cTen® is a Trans-epithelial treatment which implies that the laser will remove, in one single step, only the necessary fraction of epithelium and stroma, according to the planned ablation profile to optimise the quality of vision. This smooth process allows for the execution of a fully No-Touch laser procedure, free from intraoperative risk of complications which does not require any eye manipulation.

cTen® dramatically reduces patients’ and surgeons’ time in the operating theatre being a Fast one-step surgery.

cTen® thanks to its gentle laser ablation limited to the treatment zone, dramatically accelerates corneal healing. 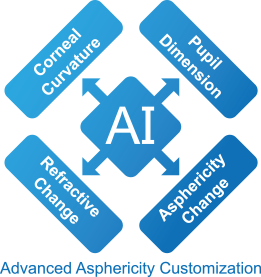 CIPTA® includes our exclusive algorithm AI. Only AI fully and interactively compensates for multiple factors each affecting and affected by asphericity.

You can find out more about which cookies we are using or switch them off in settings.

This website uses cookies so that we can provide you with the best user experience possible. Cookie information is stored in your browser and performs functions such as recognising you when you return to our website and helping our team to understand which sections of the website you find most interesting and useful.

Strictly Necessary Cookie should be enabled at all times so that we can save your preferences for cookie settings.

If you disable this cookie, we will not be able to save your preferences. This means that every time you visit this website you will need to enable or disable cookies again.